Typical sight in the irrigated belt of Ramanagra-Mandya-Mysore stretch will be of lush green paddy fields, swaying blades of sugarcane or shiny mulberry bushes; rows of bamboo stands (chandrike) on the roadside with circles of ivory colored cocoons neatly arranged, as also of cattle and sheep roaming here and there. Coconut palms or bushes of pulses line the boundaries of most fields. Network of long canals run through parts of this landscape. Farmers – usually men on bikes- taking rounds around fields, markets and offices is a common sight. Absence of empty fields imply bounty and even farm labourers seem to be making a decent living. Despite this vibrancy, lives here seem to be vulnerable in many ways – especially to volatile prices.

35 year old Gayathri’s is a landless household of three women, including her mother and younger daughter, Reshma. The threesome live in a village about 35 km away from the town of Ramanagara. Her husband died of tuberculosis six years ago, after a prolonged treatment financed through loans and disposing off their share of ancestral land. Currently she has an outstanding loan of Rs. 85,000 on this account, taken at 2% interest rate per month. This is just one among the many loans that Gayatri has availed. Her elder daughter went away with someone. She spent borrowed money to find her and get the couple married. She also took a gold loan of one lakh from a bank to repair her house and a fourth loan from a women’s self-help group to buy cows.

Gayatri keeps four local-breed cows and two of them yield four litres of milk every day that is sold to the village dairy. Though she cannot grow mulberry anymore as their land has been sold off, she keeps a few chandrike to rear silkworms into cocoons, buying mulberry leaves from her neighbor. ‘Milk’ and ‘silk’ together earned her around Rs. 77,000 last year. In addition to this, Gayatri together with Reshma earned around Rs.30,000 from wage labour. Thus silk, milk and coolie work support Gayatri in her tight rope walk of life on multiple loans. 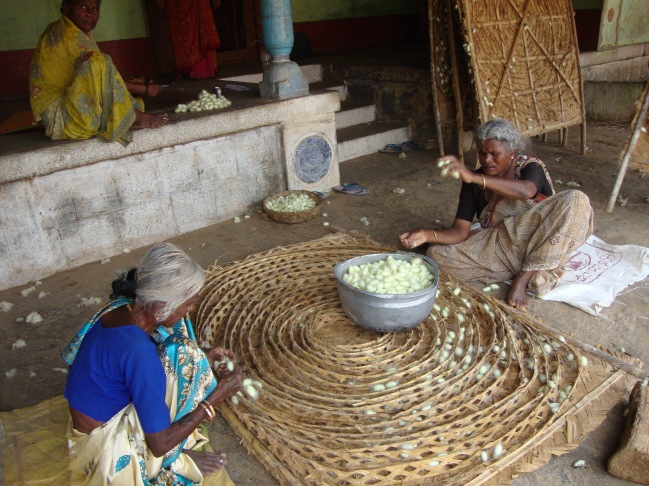 She pays huge amount of interest every month. When silk prices crashed in 2014, even interest payment was halted, accumulating penalty. She wades through such crises by selling cows. When ‘silk’ ditches, as and when trade polices change, milk and cattle save them from starvation and distress. She trusts milk more than silk as its price doesn’t seem to fluctuate much, though it is silk that gives her occasional savings. Gayatri hopes for a secure future for Reshma, who ironically spends more days in wage labour than in school.